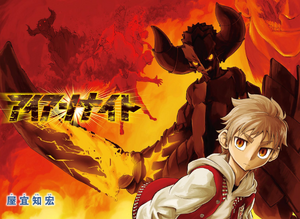 The chapters of the manga series Iron Knight are written and illustrated by Yagi Tomohiro. The first chapter premiered in Weekly Shonen Jump on December 5, 2013, which is where the series has continued its serialization since then. Before the first chapter, however, two one shots were released. In 2012, the first one shot, called Goblin Night, won the Golden Future Cup. The next year, the second one shot was released called Iron Knight. The name stayed and became the name of the series that developed from it.

Retrieved from "https://ironknight.fandom.com/wiki/Volumes_and_Chapters?oldid=6878"
Community content is available under CC-BY-SA unless otherwise noted.